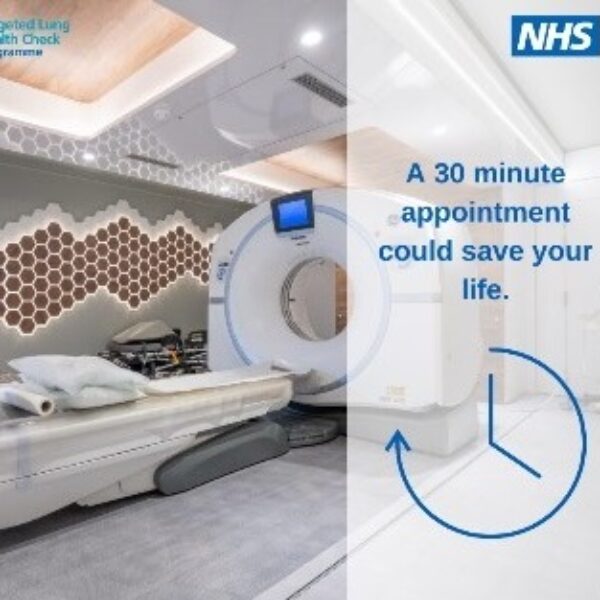 Why Targeted Lung Health Checks are so Important

Lung cancer causes more deaths in the UK than any other cancer. Symptoms are normally late to appear and it is therefore often diagnosed at a later stage, when treatment options are more limited. However, most lung cancers grow slowly enough for them to be found at an early stage through a CT scan.

To help find lung cancers earlier, the NHS is rolling Targeted Lung Health Checks (TLHC) out across England, offering a low dose CT scan to those people most at risk of developing lung cancer.

Lung cancer disproportionately affects people living in the most deprived areas of the country. Telephone Lung Health Checks are therefore being offered to people living in these areas first and if a CT scan is needed, this will often take place on a mobile CT scanner which is parked as close to the participant’s local area as possible. This helps maximise uptake by reducing barriers to access and is particularly important for communities where public transport is difficult for a variety of reasons, and car parking charges put people off from attending appointments at hospital sites.

Currently in the North East and North Cumbria (NENC), TLHCs are being offered to patients registered with a GP in Newcastle Gateshead, Tees Valley, South Tyneside and Sunderland. From April 2023, Lung Health Checks will be available in more areas in NENC, with a gradual rollout planned across North Cumbria, Northumberland, North Tyneside and County Durham over the next 4 years. 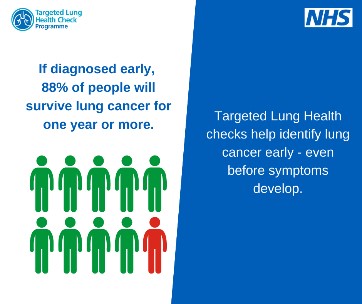 Patients living in the most high-risk areas will receive their invites first, with invites issued on a practice-by-practice basis. Invites will be sent to patients aged 55-74 whose GP record shows that they are a current or ex-smoker. Targeting invites in this way helps reduce health inequalities, as those most at risk are offered the opportunity first.

Communications are developed with local populations in mind and tailored according to local needs. Information is available in a range of commonly spoken languages and appointments can be adapted according to participants’ needs (for example, participants with a learning disability can be offered a face-to-face Lung Health Check appointment rather than a telephone appointment and can be supported by an informal or paid carer during their appointment). Local teams raise awareness of the service as it moves into new areas, engaging with local community groups, and information is displayed in commonly visited locations such as GP surgeries, local pubs and working men’s clubs.

Data around engagement is captured to help understand why some patients don’t take up the offer of a Lung Health Check or decline a CT scan, and further work is underway to help understand the reasons in more detail. Once this work is complete, it will help inform future service delivery, to ensure that any barriers to access are removed and health inequalities are reduced as far as possible.

By using this site you agree to the use of cookies for gathering anonymous analytics. Learn More Ok