Do It For Yourself Lung Cancer Awareness

“Do It For Yourself” Lung Cancer Awareness Campaign

We’re proud to support the Do It For Yourself campaign as part of a collation which aims to raise awareness of the signs of lung cancer and encourage the people of the North East and North Cumbria to contact their GP if they’ve been experiencing a cough or ongoing breathlessness for three weeks or more.

A variety of communication resources are available below:

What is the ‘Do it For Yourself’ campaign? 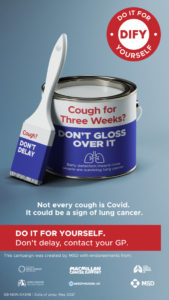 breathlessness for three weeks or more – particularly targeting men and women over 50 who at an increased risk.The first phase launched across Greater Manchester, the North East and North Cumbria and consisted of an out of home creative campaign along with supporting media activities including new regional statistics, case studies, medical experts and a broadcast day to encourage people with the above symptoms to talk to their GPs (whilst reassuring them that the NHS is open and safe to use). TV doctors, Dr Hilary Jones and Dr Amir Khan also supported the campaign as spokespeople with a broadcast day. Given the initial successful roll-out, the campaign is now launching in additional regions across the country to continue to raise awareness of key lung cancer symptoms.

Where did the DIY theme for the creative advertising come from?

With the outbreak of the COVID-19 pandemic, we became a nation of DIYers, with more of us prioritising taking care of our homes over taking care of our health. When we notice something isn’t right, like a cough that’s been going on for a long time, rather than getting on with things, we can bury our heads in the sand.Hinging on that insight, new research was commissioned across the target regions to assess which issue people are more likely to address sooner – a problem with their house or a warning sign with their health. Messaging and creative was developed to challenge people on the fact that they will often take the time and energy to fix things around the house, but not direct that same energy and drive into seeing their GP about worrisome health symptoms.

Why was this campaign needed?

Following the outbreak of coronavirus, there was a growing realisation that the symptom crossover between COVID-19 and lung cancer (which includes a persistent cough) coupled with concerns about being exposed to the virus and not wanting to be a burden on the NHS, meant many people with possible symptoms of lung cancer were not presenting themselves to primary care professionals, resulting in a decline in lung cancer referrals.‘Do it For Yourself’ seeks to address this issue by raising awareness of lung cancer symptoms and calling attention to the fact that not every cough is COVID, while reassuring people that their GP are open and ready to see them safely.

Why does the campaign specifically targeted people who are over 50?

Lung cancer can affect people of all ages, but the risk of these cancers increases as you get older. The campaign specifically targets men and women over the age of 50 as lung cancer most commonly affects people of this age group. It is therefore important to make sure this age group specifically is aware of what symptoms they should be looking out for.

Who developed the campaign?

By using this site you agree to the use of cookies for gathering anonymous analytics. Learn More Ok